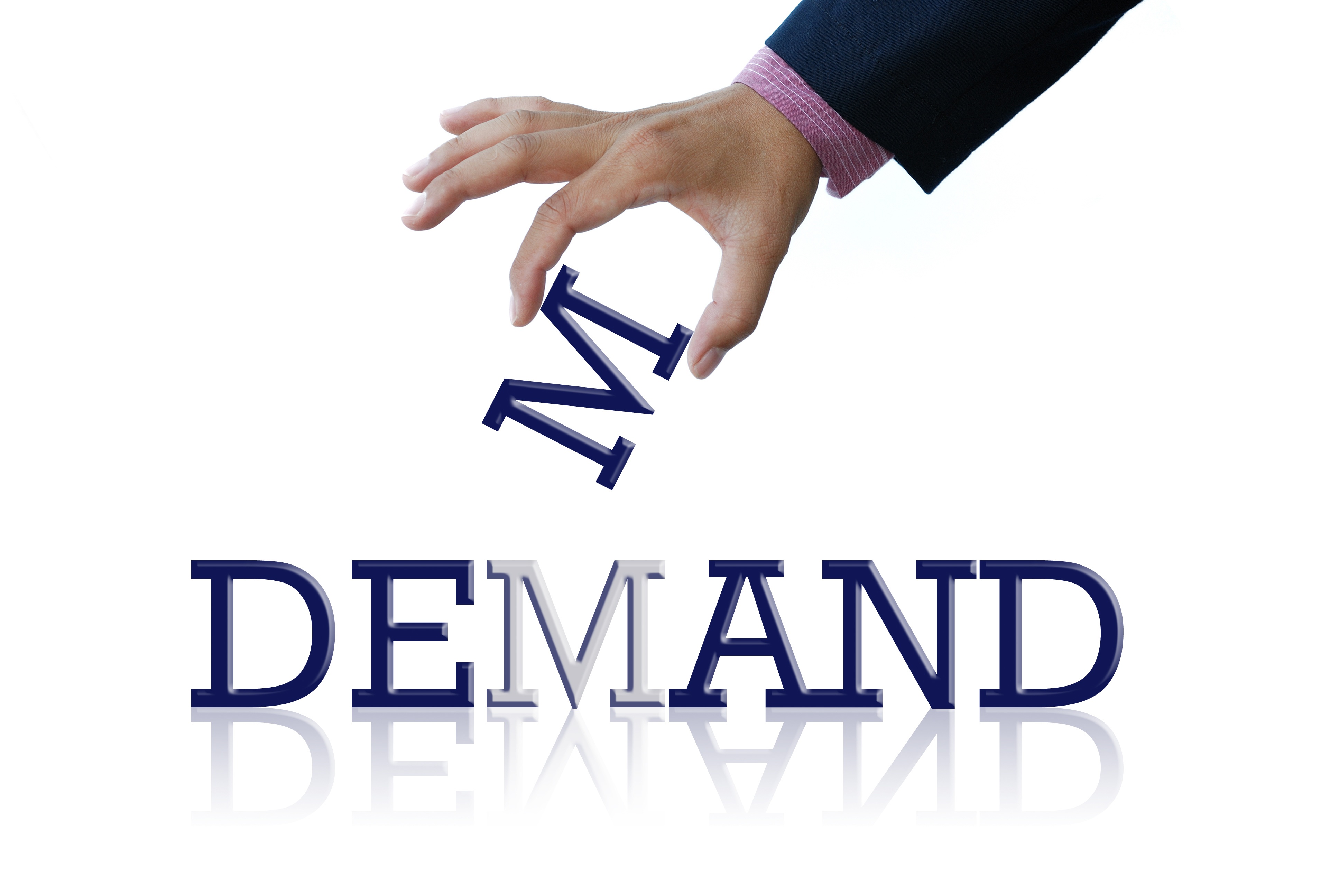 You want your lawyers to be strongly assertive when you believe that your trademark rights are being used in an infringing or generic way.  But formal demands that the improper activity must cease have, on occasion, been posted to social media and ridiculed there, or have just been ineffective.

A different approach may be more appropriate in some situations.  For example, letting a customer or fan know that you appreciate their wanting to show their allegiance to you and explaining why it is a problem for them to use your trademark may work better.  Humor also can soften the blow effectively.  And it is helpful to be mindful that the recipient may need time to phase out objectionable uses.

Here are recent examples of unusually creative trademark communications that got noticed.

As series of TV commercials from for BUD LIGHT beer were set in the medieval era and featured the phrase “Dilly Dilly” multiple times.  Minneapolis’ Modest Beer Company thereafter unveiled a double IPA made with Mosaic hops, which it called DILLY DILLY.

AB InBev sent a town crier to the Modest offices.  He delivered its cease and desist message by reading a scroll that explained the problem in stilted pseudo medieval English and even offered the Modest executives two Super Bowl tickets (which undoubtedly cost less than a law suit).  This worked, because Modest said it would rename its beer COAT TAILS. 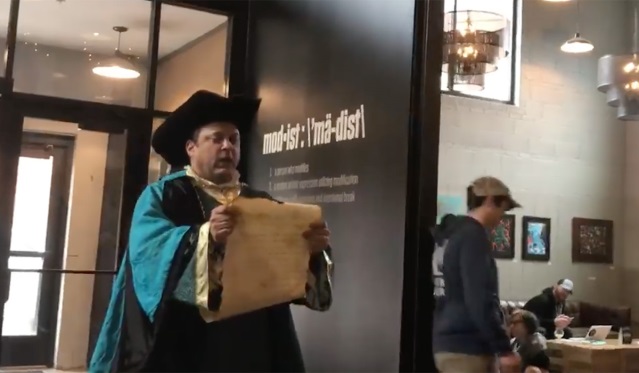 Dear friend of the Crown, Modist Brewing Company.  Congratulations on the launch of your new beer, Dilly Dilly Mosaic Double IPA!  Let it be known that we believe any beer shared between friends is a fine beer indeed.  And we are duly flattered by your loyal tribute.  However, “Dilly Dilly” is the motto of our realm, so we humbly ask that you keep this to a limited-edition, one-time-only run.  This is by order of the king.  Disobedience shall be met with additional scrolls, then a formal warning, and finally, a private tour of the Pit of Misery.  Please send a raven, letter or electronic mail to let us know that you agree to this request.  Also, we will be in your fair citadel of Minneapolis for the Super Bowl, and would love to offer two thrones to said game for two of your finest employees to watch the festivities and enjoy a few Bud Lights.  On us.  Yours truthfully, Bud Light.

2. A song proclaimed that VELCRO is a trademark for “hook and loop” fasteners

VELCRO brand fasteners have been around for over 60 years.  But their very popularity threatened the exclusive rights of the Velcro Companies despite their educational, advertising and enforcement activities.

Their creative solution was to create a video of about 2 minutes showing lawyers and actors singing the catchy song, “Don’t Say Velcro.” 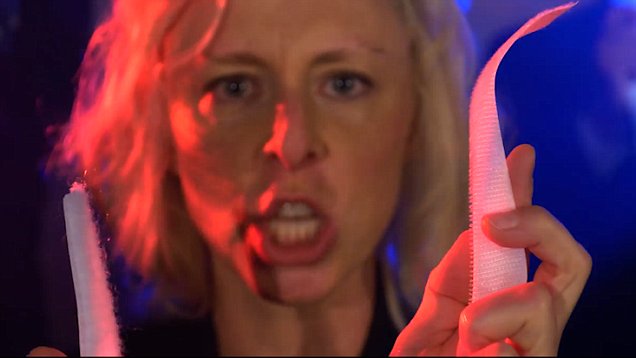 You can see this video, which has been viewed more than 4 million times, at https://www.youtube.com/watch?v=rRi8LptvFZY.

The lyrics say, in part:

3. Netflix objected to the name of a pop-up bar

A very popular STRANGER THINGS pop-up bar appeared in Chicago with lots of décor elements drawn from the Stranger Things Netflix show.  The bar was to have a six-week run ending October 1, but when the bar proposed to extend its life to October 27 to coincide with the start of  Season 2 of the Netflix show, Netflix sent a letter objecting to the extension in language reminiscent of its show. 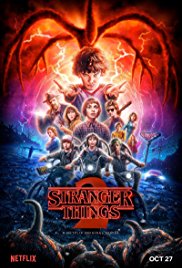 Here is what the letter said:

My walkie talkie is busted so I had to write this note instead. I heard you launched a Stranger Things pop-up bar at your Logan Square location. Look, I don’t want you to think I’m a total wastoid, and I love how much you guys love the show. (Just wait until you see Season 2!) But unless I’m living in the Upside Down, I don’t think we did a deal with you for this pop-up. You’re obviously creative types, so I’m sure you can appreciate that it’s important to us to have a say in how our fans encounter the worlds we build.

We’re not going to go full Dr. Brenner on you, but we ask that you please (1) not extend the pop-up beyond its 6 week run ending in September, and (2) reach out to us for permission if you plan to do something like this again. Let me know as soon as possible that you agree to these requests.

We love our fans more than anything, but you should know the Demogorgon is not always as forgiving. So please don’t make us call your mom."

The bar’s owners and manager insisted that  there were no hard feelings, and ended the pop-up on October 1 as originally planned.  Netflix got lots of favorable press for its light-hearted touch.

Jack Daniel's Properties, the owner of the JACK DANIEL’S trademarks, was understandably unhappy with the cover of the novel Broken Piano For President by Patrick Wensink 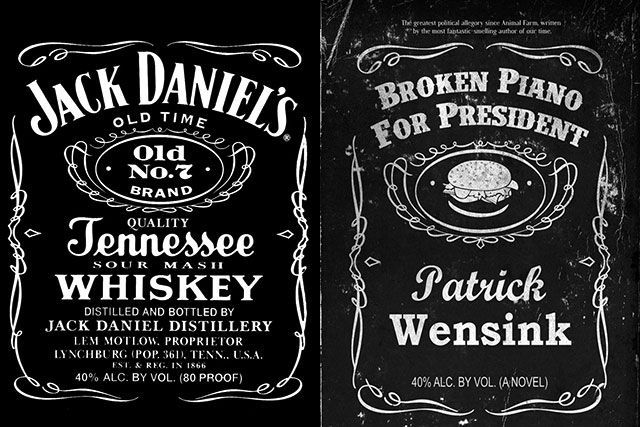 As you can see below, the demand letter politely explained the situation, asked only for a cover re-design on the next printing. and even offered to contribute towards the cost of the re-design if it was changed sooner.  The press called it “the nicest cease-and-desist letter ever.”

This is what the letter said in part:

We are certainly flattered by your affection for the brand, but while we can appreciate the pop culture appeal of Jack Daniel's, we also have to be diligent to ensure that the Jack Daniel's trademarks are used correctly. Given the brand's popularity, it will probably come as no surprise that we come across designs like this on a regular basis. What may not be so apparent, however, is that if we allow uses like this one, we run the very real risk that our trademark will be weakened. As a fan of the brand, I'm sure that is not something you intended or would want to see happen.

As an author, you can certainly understand our position and the need to contact you. You may even have run into similar problems with your own intellectual property.

In order to resolve this matter, because you are both a Louisville "neighbor" and a fan of the brand, we simply request that you change the cover design when the book is re-printed. If you would be willing to change the design sooner than that (including on the digital version), we would be willing to contribute a reasonable amount towards the cost of doing so. By taking this step, you will help us to ensure that the Jack Daniel's brand will mean as much to future generations as it does today.

This approach was a huge success for both parties.  After Mr. Wensink posted the letter on his website, his book went to the top of the Amazon satirical books chart and was the number six bestseller overall. His website hits jumped from 20 a day to 200,000 in three days.  Further, the cover was changed, without any request for Jack Daniel’s to contribute to the cost.

As my mother used to say, “Honey is sweeter than vinegar.”