Do Not Mimic a Distinctive Famous Mark
July 8, 2021 - By William Borchard

In choosing a mark or its form of display, do not mimic a distinctive famous mark.  If your mark is likely to dilute the famous mark’s distinctiveness by blurring or tarnishment, you may be prevented from registering, or even using, your similar mark regardless of the purpose of your mark, the goods or services for which it is to be used, or a lack of likely confusion. 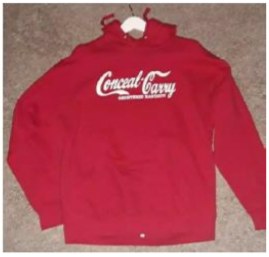 A clear example of trademark dilution involved an intent to use application filed by Robert Troy Hoff, who sought to register CONCEAL-CARRY in the script used for the Coca-Cola Script Mark, appearing above the term REGISTERED HANDGUN in smaller block lettering, for articles of clothing in Class 25.

The Coca-Cola Company opposed based on its famous Coca-Cola Script Mark for soft drinks and other items.

In sustaining the opposition and refusing registration, the Trademark Trial and Appeal Board (TTAB) only considered the dilution claim and never addressed Coca-Cola’s likelihood of confusion claim.  This was the reverse of the TTAB’s usual approach, and it probably resulted from the strength of the dilution claim.

A famous mark must be widely recognized by the general consuming public as the plaintiff’s source designation.  The TTAB determines this by considering four non-exhaustive factors:

Dilution is an association between a mark or trade name and a famous mark and whether or not there is a likelihood of confusion, competition, or actual economic injury.  The TTAB considers the following elements:

Whether dilution by blurring is likely involves six non-exhaustive factors:

The record contained examples of advertising consistently showing the Coca-Cola Script Mark for over 130 years.  Coca-Cola also reported its advertising and promotional expenditures, which the TTAB characterized as "staggering,” and its revenue from net sales, which the TTAB characterized as “enormous.”  The most significant of the four elements, the extent of recognition, was proven by unsolicited media articles as well as earlier court and the TTAB cases.  Of course, the Coca-Cola Script Mark had been registered since 1893.

Mr. Hoff’s counsel asserted that recognition of the Coca-Cola Script Mark is of limited strength and is declining rapidly, but this was without any evidence.

Similarity.  The TTAB characterized the visual similarity between the two marks as “obvious and striking.”  It compared the two marks side-by-side for dilution purposes, even though this would not be appropriate for confusion purposes.  The TTAB found the similarities comparable to those of a case it decided a few years earlier involving the New York Yankees, who were represented by our firm,  where the TTAB refused registration to a design mark found to have an overall similarity to the famous New York Yankees logo that was “immediately apparent.”  New York Yankees Partnership v. IET Products & Services, Inc., 114 U.S.P.Q.2d 1497, 1507 (T.T.A.B. 2015).

Distinctiveness, Exclusivity and Recognition. The record contained no evidence of any third party use of a mark similar to the Coca-Cola Script Mark, which the court found had become extremely famous long ago.

Intent.  Although  counsel argued that Mr. Hoff’s mark was created “to place emphasis on legal, and responsible practice of carrying a handgun or other weapon in public and on continuation of the campaign design [sic] to make everyone aware of the ongoing erosion of our constitutional rights, such as the Second Amendment to the United States Constitution,” the TTAB again noted that arguments of counsel are no substitute for evidence, and found that Mr. Hoff’s intent might be inferred from his slavish copying of elements of the Coca-Cola Script Mark.  The TTAB found no credible explanation for Mr. Hoff’s choice of “conceal carry” rather than the term of art in gun legislation “concealed carry,” other than his desire to mimic its counterpart Coca-Cola.  The use of REGISTERED HANDGUN mimicked the historical use of “Trade-Mark Registered” below the Coca-Cola Script Mark, and there was no evidence that handguns are “registered.” Mr. Hoff’s use of a white mark against a red background, colors historically used for the Coca-Cola Script Mark, further corroborated his intent to trade on the Coca-Cola mark.

Actual Association.  Since Mr. Hoff had not made any sales under his mark, there was limited opportunity for the public to make any actual association.

The Coca-Cola Company had not taken a position relating to firearms, which is the subject of fervent debate in the United States.  The TTAB held that Coca-Cola was legitimately concerned that it might be incorrectly associated with a position with which it did not agree, and that Coca-Cola had the right to take one side, or the other, or not to participate at all.  The association with Coca-Cola, even if ephemeral, compromised Coca-Cola’s ability to exercise exclusive control over the goodwill symbolized by the Coca-Cola Script Mark.

Thus, the TTAB found that Mr. Hoff’s mark would likely blur the distinctiveness of the famous Coca-Cola Script Mark, and it sustained the opposition on the dilution ground.

Author’s Note:  We previously wrote about a similar decision in which the TTAB sustained an opposition by Nike Inc. against an intent to use application to register JUST BELIEVE IT in view of the famous registered mark JUST DO IT.