In Dr. Seuss Enterprises, LP v. ComicMix LLC, Case No. 19-55348 (9th Cir. December 18, 2020), the Ninth Circuit held that Oh, the Places You’ll Boldly Go! (“Boldly”)—ComicMix’s Star Trek-themed sendup of Dr. Seuss’s iconic Oh, the Places You’ll Go! (“Go!”)—was an infringement rather than a parody. In finding that all four fair use factors weighed in Dr. Seuss’s favor, the Ninth Circuit decisively reversed the lower court’s decision, which had held that Boldly was a fair use, that is, a permissible albeit unauthorized use of Go!

The Ninth Circuit’s decision is a good reminder for would-be mashup creators that parody is a relatively limited concept, requiring commentary on or criticism of an earlier work. Though there is no use of a copyrighted work that is automatically fair, parody is more likely to be considered a transformative fair use than other forms of social commentary (e.g., satire). However, simply copying the essential elements of a recognizable copyrighted work (whether a book, film, artwork or any other expressive work), then placing them in a different context, without more, is likely to be considered an infringement rather than a parodic fair use. Those who incorporate elements of another’s creation into a new work should either obtain a license from the original work’s owner, or else be sure to transform the original work into something new by adding material and changing the message.

Plaintiff Dr. Seuss Enterprises, LP (“Dr. Seuss”), which owns the copyrights in Go! (a perennial graduation gift favorite) and other Dr. Seuss works, regularly licenses them to third parties for derivative works, such as the infant-centric book Oh, Baby, the Places You’ll Go! The concept of Boldly, however, was born without Dr. Seuss’s authorization in 2016, when ComicMix, a trio that included a former Star Trek episode writer, decided to recontextualize the Star Trek crew in a wacky Seussian world. ComicMix intentionally crafted Boldly’s title, story and illustrations to evoke (and, in some cases, slavishly copy) Go! and other classic Dr. Seuss works, How the Grinch Stole Christmas (“Grinch”) and The Sneetches and Other Stories (“Sneetches”), with the intent of publishing Boldly in time for graduation season. ComicMix’s ensuing crowdfunding raised not only funds for Boldly’s proposed publication, but also the concerns of Dr. Seuss, which sent ComicMix a cease-and-desist letter. ComicMix responded that Boldly is a parody, and thus a fair use, of Go!, but Dr. Seuss disagreed and sued ComicMix for copyright infringement. The district court sided with ComicMix, holding that (the still-unpublished) Boldly was a transformative parody of Go! that would not affect Dr. Seuss’s sales. Dr. Seuss appealed.

Reversing the district court’s ruling, the Ninth Circuit found that all four factors used to determine whether a particular use of a copyrighted work is fair (rather than infringing) weighed in Dr. Seuss’s favor, making Boldly an infringement rather than a permitted use.

The first fair use factor—the purpose and character of the use—looks at whether the new work is transformative, that is, whether it adds something new and thereby alters the message or expression of the original work. A parody, that is, a new work that mimics elements of an earlier work to comment on it or hold it up to ridicule, is more likely to be (though not automatically) held transformative. The Ninth Circuit roundly rejected ComicMix’s characterization of Boldly as a parody of Go!, finding that Boldly neither critiqued nor commented on Go! Instead, Boldly only mimicked Go!’s expressive elements “to get attention or to avoid the drudgery in working up something fresh.” As shown in the examples below, Boldly (right) simply repurposed both images and text used in Go! (left), definitively weighing against a finding of fair use. 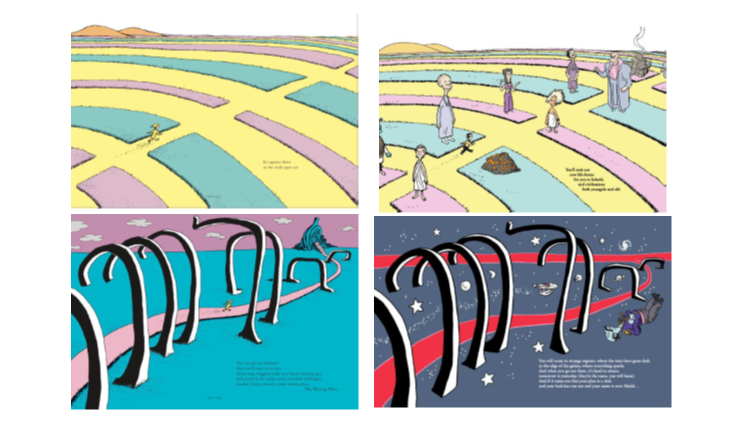 The Ninth Circuit found that the second (albeit not “terribly significant”) fair use factor—the nature of the copyrighted work—weighed in Dr. Seuss’s favor because Go! is a creative, expressive work.

With regard to the third factor—the amount and substantiality of the portion used in relation to the copyrighted work as a whole—the Ninth Circuit held that Boldly used both a quantitatively and qualitatively significant amount of Go!, thereby weighing against a fair use finding. Specifically, Boldly copied, as much and as closely as possible, close to 60% of Go! in addition to significant illustrations from Grinch and Sneetches, collectively comprising the heart of the works. ComicMix’s verbatim copying weighed against finding fair use.

Finally, the Ninth Circuit held that the fourth factor—the effect of the use upon the potential market for or value of the copyrighted work—also favored Dr. Seuss. To start, ComicMix intended for Boldly to capitalize on the same graduation market as Go! Moreover, Dr. Seuss already extensively licensed works to and collaborated with other creators, such that Boldly and similar unlicensed works would entail a market harm to Dr. Seuss. Concluding that the “unrestricted and widespread conduct” of the sort engaged in by ComicMix could create incentives to pirate copyrights and disincentivize the creation of illustrated books like Go!, the Ninth Circuit held that ComicMix could not sustain a fair use defense.

Caution is advisable in creating a mashup, or other work that might qualify as a parody, to avoid running afoul of the copyright law.