A Trademark Combining a Laudatory Word with a Descriptive Word May Still Be Descriptive
Aug. 23, 2022 - By William Borchard 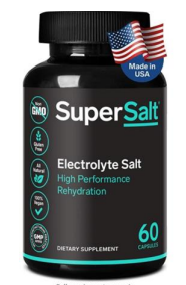 A trademark combining two words may evoke its own unique commercial impression—separate from the meanings of its component words--and be inherently registrable as a unitary term.  But if each component word is merely descriptive or laudatory, the combination mark may retain the same meaning as its component words and may not be registrable on the Principal Register (which is for marks that are inherently distinctive) unless the mark has acquired a source identification distinctiveness (called “secondary meaning”).

Super Salt, LLC applied to register SUPERSALT (without any special stylization) as a trademark for “dietary supplements.”  The Examining Attorney refused registration on the Principal Register on the ground that this combination mark was merely descriptive of the goods, for which the main ingredient was “pink salt.”

The Applicant appealed to the Trademark Trial and Appeal Board (TTAB), which affirmed the refusal but accepted an amendment to the Supplemental Register (which is for marks that are not inherently registrable but are capable of acquiring a secondary meaning).

The TTAB easily found that “salt” was merely descriptive of the Applicant’s dietary supplement having “pink salt” as its main ingredient.

The Applicant argued that “super” had various meanings such as “higher mineral content” and “high performance hydration” and “rapid oral rehydration.” It submitted printouts of over 20 previously issued Principal Register third-party registrations for non-supplement goods that contain the term “super.”  The Applicant also relied on prior TTAB decisions approving SUPER-formative marks.  Further, the Applicant argued that a consumer would focus on the alliteration of its SUPERSALT mark and would need to undertake mental thought to discern the nature of the goods.

The TTAB was not persuaded by these arguments.  The Applicant itself had claimed that the salt in its product had a much higher mineral content than refined salt used in other products, so the TTAB found that SUPER conveyed this superiority in a laudatory manner.  The prior registrations and decisions granting registration to SUPER-formative marks, such as SUPER IRON for soil supplements containing an iron component, were said not to be controlling as to the record before the TTAB in this case.  The TTAB also found nothing about the sound quality of the Applicant’s mark that created a distinct commercial impression.

Thus, the TTAB found that this combination of the laudatory term SUPER with the merely descriptive term SALT retained its merely descriptive character, so SUPERSALT was not registrable on the Principal Register.  However, the TTAB permitted an amendment of this application to the Supplemental Register since this mark might acquire a secondary meaning in the future.