LTTB LLC owned four U.S. trademark and service mark registrations, two of which had become incontestable, of the pun LETTUCE TURNIP THE BEET for tote bags, t-shirts and other goods and services.  It displayed this phrase across the front of the items, and also on hangtags or labels affixed to them.  LTTB sued an Australian online retailer named Redbubble, Inc. for selling similar products displaying the same phrase.  Redbubble’s defense was that its use of this phrase was protected by the doctrine of aesthetic functionality. 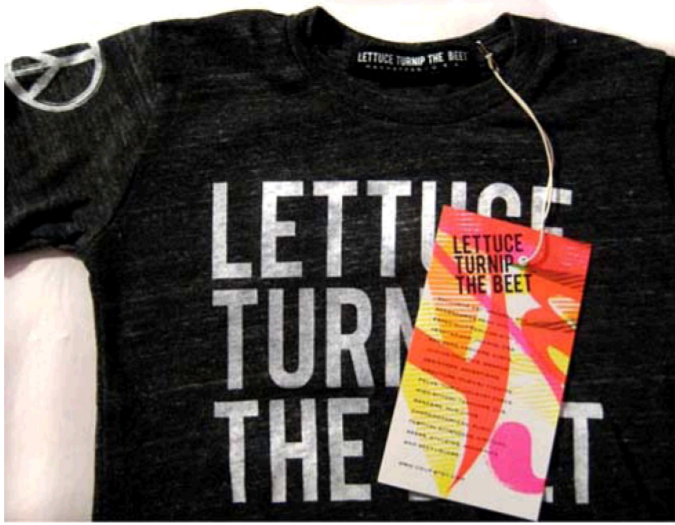 A trademark indicates the source of a product.  However, it is not protectible if its use is functional as used either by the owner or by an alleged infringer.  A word, phrase, or design may have utilitarian functionality (being essential to the use or purpose of the article or affecting its cost or quality, such as a dual-spring design for a road sign).  Some courts have also accepted the idea that a mark may have aesthetic functionality (used for goods bought for the appeal of the mark itself independent of any source-identifying function, such as a heart-shaped design for a candy box).  The doctrine of aesthetic functionality is applied when protection would put competitors at a significant non-reputation-related disadvantage if they were precluded from using the same feature.

For example, china patterns were not protected as trade dress (a form of trademark) because competitors used them primarily for the attractiveness of the patterns.  Similarly, jewelry displaying the insignia of a jewelry cooperative was not protected because purchasers primarily wished to express allegiance to that organization regardless of the manufacturer of the jewelry.

On the other hand, cases involving handbags ornamented with Louis Vuitton indicia, and key chains and license plate covers displaying Volkswagen and Audi logos, were permitted to go to trial so the plaintiffs could establish that consumers considered these indicia primarily for their source-indicating value.

A graduate of the Fashion Institute of Technology founded the LTTB business of selling silkscreened items displaying the pun LETTUCE TURNIP THE BEET, which grew [pun intended] from a single street vendor into a popular online store with 10,000 followers and sales of nearly $1 million.

In LTTB’s trademark infringement lawsuit against Redbubble, the U.S. District Court for the Northern District of California concluded that LTTB’s products “are simply the vehicle for distributing the claimed ‘trademark,’ rather than the other way around, where a trademark is used to identify the source of the goods.”

The District Court granted Redbubble’s motion for a summary judgment dismissing LTTB’s suit on the ground that Redbubble’s mere use of the pun was aesthetically functional rather than source-identifying.

LTTB appealed to the U.S. Court of Appeals for the Ninth Circuit, which affirmed the dismissal.  The Court said that the mark did not have utilitarian functionality because the products bearing LETTUCE TURNIP THE BEET would still function as t-shirts, tote bags, etc. without that mark, and that the use of that mark did not alter the cost or add to the quality of the products.  But would BTTB’s exclusive use of that mark put competitors at a significant non-reputational-related disadvantage and therefore be aesthetically functional?

LTTB presented no evidence that consumers buy the goods because they associate the phrase with LTTB rather than because they want goods bearing the phrase.  Therefore, despite the fact that LTTB’s mark was registered, and that neither Redbubble nor the Court challenged the validity of those registrations, this infringement claim was subject to the aesthetic functionality defense in that Redbubble’s activity did not deceive or mislead consumers about the source of the goods but only copied the pun for its own sake.

The District Court and the Ninth Circuit both pointed out, however, that LTTB would have a valid case against anyone using the incontestably registered phrase as a source identification.

Author’s Note:  This decision, with which some may disagree, illustrates that the dividing line between a protectable mark and an aesthetically functional mark is not always apparent and depends on the facts of each particular case and the exercise of subjective judgment.

A trademark owner can try to show that its mark is not only popular in itself but also signifies the source of its goods by introducing evidence such as surveys, consumer statements, news articles, and advertising.  Of course, an accused infringer can introduce similar evidence to show the opposite.

Aside from the functionality issue, the Trademark Act also provides that the owner of a registered trademark cannot prevent anyone else from using, otherwise than as a mark, a term which is descriptive of, and used fairly and in good faith only to describe, that party’s goods or services.

So if you adopt a term or phrase that is generally used in ordinary language, or is inherently communicative of an idea, or describes something about your goods or services, you may not be able to stop competitors from using the same term or phrase, even if you have registered it, in what may be considered a non-trademark sense.