Would Two Registrations of THE as a Trademark for Clothing be an April Fools’ Day Joke?
Aug. 9, 2022 - By William Borchard

A trademark is supposed to identify the source of the goods for which it is used and to distinguish them from the goods of others.  Do you think the word “THE,” standing alone, has those qualities when it appears on clothing?

The U.S. Patent and Trademark Office (USPTO) issued a registration to Ohio State for the word mark THE (without any particular font style, size, color, or design element) for “t-shirts, baseball caps and hats, all of the foregoing being promoted, distributed, and sold through channels customary to the fields of sports and collegiate athletics.” (Emphasis added). This is a Principal Register registration, No. 67963118 issued June 21, 2022, claiming use since 2005 but without any claim of acquired distinctiveness.

Because Ohio State had a priority use date, Ohio State filed an opposition against the Marc Jacobs application. However, the parties negotiated a Consent Agreement pursuant to which the opposition was immediately suspended, Ohio State amended its goods identification as highlighted above, and Marc Jacobs amended its goods identification to add “all of the foregoing being promoted, distributed, and sold through channels customary to the field of contemporary fashion.” (Emphasis added).

You may wonder whether the common word THE can be a source identification for t-shirts without a claim of acquired distinctiveness (known as “secondary meaning”), no matter where the t-shirts are promoted, distributed and sold.

Ohio State originally submitted the specimen shirt shown below.  The Examining Attorney refused registration on the ground that the placement of the mark made it merely ornamental and that it failed to function as an indication of source of these goods. 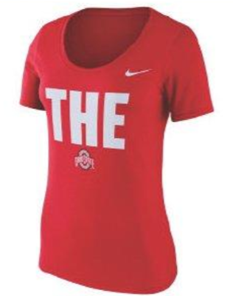 Ohio State filed a lengthy detailed response, supported by a declaration and exhibits, arguing that the applied-for mark was an indicator of Ohio State as the secondary source of the goods because students, faculty, sports fans, and the public had come to identify THE as particularly related to The Ohio State University.  Although Ohio State had been founded in 1870 under the name Ohio Agricultural & Mechanical College (also referred to as Ohio A&M), it had changed its name eight years later to The Ohio State University, deliberately using “The” to show that it was the leading educational institution in Ohio.  Over time, and since at least as early as the 1980s, the “THE” began to be prominently emphasized when spoken, and to be mentioned in unsolicited articles.  At least as early as 2005, Ohio State itself began to license THE for use on apparel and other products.  This convincing showing was virtually identical to evidence that would have supported a claim of secondary meaning.

Ohio State’s response cited prior cases holding that a mark may be recognized as an indicator of secondary source and sponsorship rather than as the manufacturer of the goods on which it appears. Ohio State argued that purchasers of THE collegiate merchandise desired to demonstrate a connection to, affinity for, or affiliation with the secondary source Ohio State.

In addition, Ohio State submitted the substitute specimens shown below, which displayed its mark in the more traditional trademark placement inside the neck of a shirt, and on webpages through which the goods could be purchased. 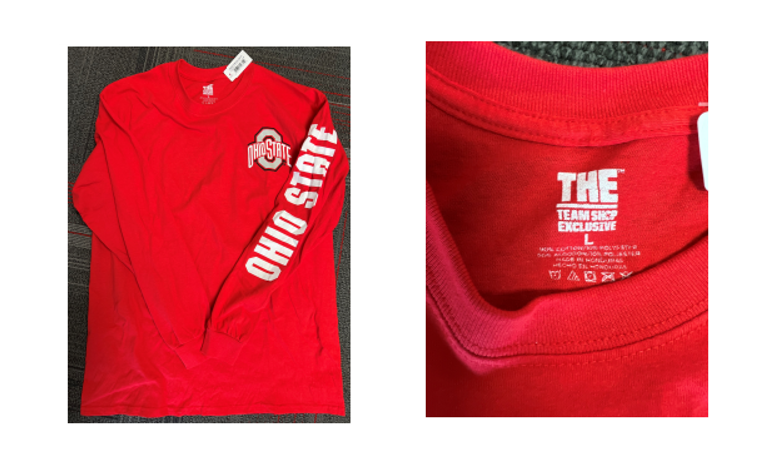 The Examining Attorney finally accepted that THE functioned to indicate Ohio State as the secondary source of the goods, and approved Ohio State’s application without requiring Ohio State to state that its mark had acquired secondary meaning.

Marc Jacobs initially applied to register THE for clothing on an intent to use basis. Then, it sought to amend the basis of its application to claim that it had used this mark on clothing for about two years, and it submitted the specimen shown below. The Examining Attorney refused registration on the ground that the placement of the mark made it merely ornamental and that it failed to function as an indication of source of these goods. 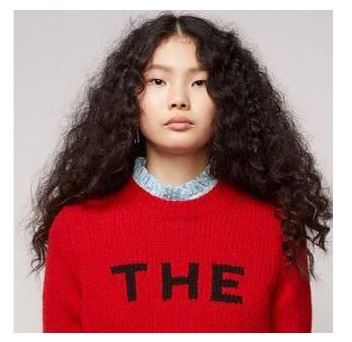 In response, Marc Jacobs deleted its claim of use.  Its application reverted to the intent to use basis, it was allowed on that basis, and it awaits the filing of a substitute specimen of use, which the Examining Attorney will examine if Marc Jacobs submits one.

The Examining Attorney also refused the Ohio State application on the ground that its mark THE was likely to be confused with the Marc Jacobs mark THE.

As mentioned above, Ohio State opposed the Marc Jacobs application, but pursuant to the negotiated Consent Agreement, the parties amended their respective applications to reflect that the respective parties’ goods exist within different marketplaces and are promoted to different consumers—the fields of sports and collegiate athletics as distinguished from the field of contemporary fashion.

After these amendments were accepted by the USPTO, Ohio State withdrew its opposition, Ohio State’s registration was issued, and the Marc Jacobs application awaits the submission of an amendment to allege use with a substitute specimen.

Notwithstanding the initial shock that anyone can have exclusive trademark rights in the commonly used word THE appearing in any form of display, the Examining Attorney accepted Ohio State’s evidence that many people have recognized its THE mark as referring to The Ohio State University.

Furthermore, the USPTO gave deference to the Consent Agreement in which the parties agreed that their identical marks could co-exist in different channels of trade and to different consumers without a likelihood of confusion.

Since the word THE is a word in common use, particularly in trademarks used by other parties, you may ask how that word could be accepted for registration by Ohio State as an inherently distinctive mark without any distinctive typography or other design element, and without requiring a statement of acquired distinctiveness.  It appears that Ohio State’s evidence would well support acquired distinctiveness in any event, but you may wonder how Marc Jacobs will establish source identification for its intent to use mark unless it can make a similar showing of a history of use.

Furthermore, you may ask whether goods displaying these respective marks truly are sold to different consumers since students and sports fans undoubtedly shop in fashion channels, and since fashion shoppers undoubtedly also are university supporters and sports fans.  Several decisions in prior cases have instructed the USPTO to give deference to the parties to consent agreements because they presumably know their marketplaces and customers better than the USPTO.  So the USPTO appears to have followed this principle in this case.

Thus, the initial reaction that no one can claim exclusive trademark rights in the word THE ends up not being a joke.  This result—whether right or wrong--appears to reflect the facts established by Ohio State’s evidence, and the able representation by the lawyers for both parties.