Avoid Selecting a Generic Term as Your Trademark
June 23, 2021 - By Dorothy Whitney

Tempting as it may be to adopt a trademark that is the common name for your product, that may not be the best idea because you cannot prevent others from using a word, or a combination of words, that consumers regard as a product name rather than as an indicator of its source.

The Swiss watch maker Wenger S.A. showed how close to the line you can come and still have protectable rights.  It sought to register SWISS MILITARY, which it had used since 1989, as its trademark for “watches of Swiss origin.” 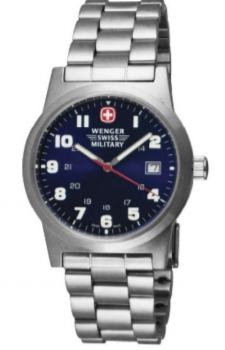 The U.S. Patent and Trademark Office (USPTO) and its decision-making bodies--the Trademark Trial and Appeal Board (TTAB) and the U.S. Court of Appeals for the Federal Circuit (CAFC) --apply a two-step inquiry to determine whether a mark is a generic term, which is unregistrable because it is incapable of indicating a particular source of goods or services:

First, what is the genus (category or class) of goods or services at issue?

Second, does the relevant public understand the term primarily to refer to that genus?  Evidence of public understanding may include purchaser testimony, consumer surveys, listings in dictionaries, trade journals, newspapers and other publications, and the applicant’s own description of its goods, among other things.

A compound word mark may be held generic if the constituent words are proven to be generic and the separate words retain their generic significance when combined.

In 2005, Wenger S.A., a Swiss watch manufacturer owned by its exclusive North American distributor Victorinox Swiss Army, Inc., applied to register WENGER SWISS MILITARY (in standard lettering) for “watches of Swiss origin” (with the exclusive right to use SWISS MILITARY disclaimed apart from the mark as a whole). Ten years later, that application eventually became U.S. Registration No. 473046.

Meanwhile, in 2010, Wenger filed another application seeking to register SWISS MILITARY (without a disclaimer) as a trademark for “watches of Swiss origin.”  That application also had a long and tortured prosecution process ending in a final refusal of registration on the ground that this is a generic term.  Wenger appealed to the TTAB, which reversed this refusal.

SWISS.  The TTAB found that SWISS is clearly a geographically descriptive term meaning that Swiss watches are perceived by the relevant public as watches of Swiss origin, not a type of watch that might originate elsewhere, especially because Switzerland is renowned for watchmaking.  The line between descriptive and generic terms sometimes is hard to draw, but in this case, the TTAB held that SWISS is not generic for watches.  This is in contrast to other terms that have lost their geographic connotation, such as “french” or “russian” for salad dressings, or “swiss” or “gruyere” for cheese.

MILITARY.  The TTAB found that MILITARY is generic for, and is commonly understood by the relevant public to refer to, a type or category of watch.

SWISS MILITARY.  The issue became whether the relevant public understood the composite term SWISS MILITARY to be a generic term for watches of Swiss origin.

Wenger characterized such companies as “infringers,” pointed to its enforcement actions against them, and submitted evidence that sales of those watches had been “insignificant and insubstantial.”  Wenger also submitted a survey of 200 respondents in which 57% understood SWISS MILITARY to be a brand name and only 35% thought it to be a generic term for watches.

The TTAB was swayed in this case by Wenger’s survey, mindful that both the CAFC and the U.S Supreme Court had said that surveys can be helpful evidence of consumer perception.  The TTAB particularly distinguished a case, about which we previously wrote, in which the TTAB had rejected the survey results when it found PRETZEL CRISPS to be generic and ordered the cancellation of its registration. That decision was affirmed on a fresh review by a U.S. Federal District Court. In the PRETZEL CRISPS case, there had been three conflicting surveys, as opposed to only one in the SWISS MILITARY case, and there had been evidence of third-party use before the applicant’s adoption of its alleged PRETZEL CRISPS mark, whereas there was no evidence of such earlier use of SWISS MILITARY.

Although MILITARY had been shown to be a common (generic) name for a type of watch, SWISS was found to be geographically descriptive—not generic--for watches of Swiss origin.  Therefore, Wenger’s mark was a combination of a merely descriptive term and a generic term—not two generic terms.

The TTAB concluded that the composite term SWISS MILITARY was registrable based on the evidence before it.  The TTAB said it would have reached the conclusion that this is not a generic term with or without the survey evidence.  It resolved any reasonable doubt in favor of the applicant on the theory that any person believing to be damaged by the registration would have the opportunity to oppose it.

If you consider adopting a mark that has descriptive or generic elements, it may be helpful to know how your proposed mark fits into the relevant spectrum of marks.