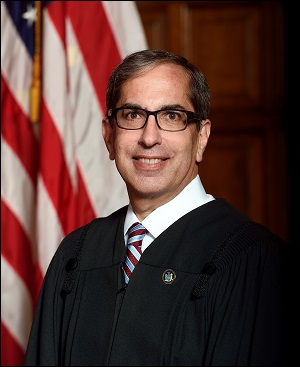 Paul Feinman grew up in Long Island, NY. He earned a Bachelor’s degree in French literature in 1981 from Columbia University. He continued his education at the University of Minnesota School of Law, where he founded an association for gay students. He started his legal career at the Legal Aid Society in Nassau County, then worked as a law clerk to Justice Angela Mazzarelli of the New York Supreme Court.

In 1996, Feinman was elected to the Civil Court. Less than a decade later in 2005, Feinman became an acting justice of the Supreme Court, and in 2007 was elected to the court. In 2012, Governor Andrew Cuomo elevated Feinman to the Appellate Division. Outside of the courtroom, Feinman was a past president of the Association of Supreme Court Justices of the State of New York, former president of the International Association of LGBTQ Judges, and a member of the Richard C. Failla LGBTQ Commission. Despite being diagnosed with myeloid leukemia in 2015, Feinman continued his hard work. In 2017, Governor Andrew Cuomo appointed Feinman to the highest court in the state, the New York Court of Appeals. On the court, Feinman was noted for being thoughtful and methodical. He hoped to add to the diversity of perspectives on the court.

Feinman continued to serve on the court until March 23, 2021, when he resigned due to his failing health. He passed away eight days later on March 31. Born and raised in New York, Paul Feinman dedicated his life to serving New Yorkers and the diversity of the legal community.

Upon Feinman’s passing, Governor Cuomo remarked “he was a mentor, friend, and role model to countless LGTBQ attorneys, helping to shepherd us out of an era where being openly LGBTQ could mean disbarment and into an era where government embodies the public it serves.”

Cowan, Liebowitz & Latman encourages you to recognize diversity and inclusion in the law every month.