The Second Circuit has held that a commercial general liability policy that covered “advertising injury” required an insurer to defend its insured against claims for trade dress infringement.

In High Point Design LLC v. LM Ins. Corp., 911 F.3d 89 (2d Cir. 2018), the court held that the duty to defend arose from an allegation of the insured’s “offer for sale” of infringing products, and from subsequent discovery demands related to advertisements.

High Point Design, LLC (“High Point”), a footwear manufacturer, was the named insured on a series of commercial general liability and umbrella insurance policies issued by LM Insurance (collectively, “Liberty”). The policies provided coverage for claims seeking damages for “personal and advertising injury,” which they defined as “injury . . . arising out of . . . [i]nfringing upon another’s copyright, trade dress or slogan in [High Point’s] ‘advertisement.’”  The inclusion of “trade dress” infringement occurring “in” an advertisement was a change from Liberty’s usual form liability policy.

On appeal, the Second Circuit framed the issue as whether High Point faced a claim of advertising injury arising from trade dress infringement in one or more of its advertisements, which would trigger Liberty’s duty to defend. In discussing the four basic principles of New York insurance law, the court noted that 1) the insurer’s duty to defend is exceedingly broad, 2) the duty to defend is invoked when an allegation in the complaint falls within the scope of the risk undertaken by the insurer, 3) the insurer is required to defend the action when the claims against the insured arise from the covered events, and 4) the insurer should look beyond the four corners of the complaint in deciding whether there is coverage. 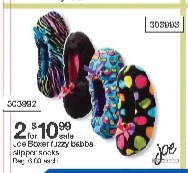 Advertisement from the Appendix to the Opinion showing slippers without packaging

The court noted as “odd” the lack of coverage for liability arising from trade dress infringement outside of the depiction in advertising, but felt obliged to accept the distinction made in this policy. The court also rejected Liberty’s argument that the duty to provide a defense should be determined by the language within the four corners of the complaint, which Liberty claims did not explicitly assert an advertising injury. Because “Buyer’s Direct’s discovery demands sought information related to advertisements,” they are “extrinsic evidence that supports interpreting the counterclaim’s allegation of ‘offering for sale’ to include a claim for damages due to advertising.”

Lastly, the court agreed with Liberty that any duty to defend commenced only when Liberty had “actual knowledge of facts establishing a reasonable possibility of coverage,” which arose from Buyer’s Direct’s discovery demands.

The Second Circuit's decision reaffirms the law in New York that an insurer’s duty to defend is broad, and courts may look beyond the language of the complaint in determining an insurer’s duty to defend. As a result, the insured may rely on language in discovery demands when requesting the insurer provide a defense. Notably, the court’s decision does not address whether the duty to defend could be prompted by other litigation documents such as motion papers. Thus, insured entities should: