Coscentra B.V. of the Netherlands sought to extend to the U.S. its International Registration of a three-dimensional perfume bottle in the shape of a male torso. 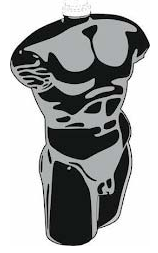 A U.S. extension is examined just like any other U.S. application.  The Examining Attorney refused registration because of a prior U.S. registration owned by the Spanish company Antonio Puig SA (a client of our firm) of a perfume bottle in the shape of a male torso.  The registered mark was claimed to be blue.

Coscentra appealed the refusal to the Trademark Trial and Appeal Board.  The TTAB noted that, since the respective identifications of goods were identical and without any restrictions, the goods were presumed to travel in the same channels of trade, and less similarity between the marks was required for a finding of a likelihood of confusion.   The TTAB also noted that the limitation to the color blue in the registration was not a significant point of differentiation because Coscentra’s application did not restrict it from using the color blue.

Coscentra argued that the torsos were sufficiently different that consumers would not expect them to come from a single source.  It pointed out that--in the words used by the TTAB--the registered mark had a slender physique and no penis, while Coscentra’s mark had a muscular physique and a penis.

The TTAB found that consumers would likely ask for each party’s product as a perfume in a container shaped like a male torso. Therefore, the TTAB held that the marks as a whole were similar in sight, connotation, and commercial impression, and it affirmed the refusal on the ground that there was a likelihood of confusion.

Author’s Note:  When you compare configuration marks or design marks for likelihood of confusion purposes, do not focus on individual design differences as a designer might do.  What counts is the overall commercial impressions of the marks viewed in their entireties.  Consumers tend not to concentrate on small differences, and the legal test is not a side-by-side comparison but rather the ordinary consumer’s imperfect recollection.