Mystic Mountain Distillery LLC applied to register a mark featuring a prominent design combined with some wording for “whiskey.” 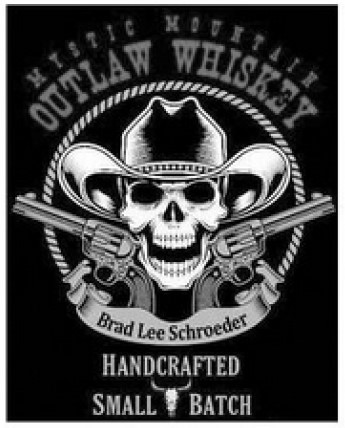 The Trademark Examining Attorney refused to register this mark because of a likelihood of confusion with a previously registered mark OUTLAW for “alcoholic beverages.”  Applicant appealed to the Trademark Trial and Appeal Board (TTAB).

Do you think the applicant’s combination word and design mark is likely to be confused with the word mark OUTLAW?

The TTAB first found that “alcoholic beverages” include “whiskey,” so the goods as described in the application and registration were in part identical and unrestricted.  As such, the TTAB presumed that the identical products travel in the same ordinary trade and distribution channels to the same potential consumers.

Next, the TTAB found that the evidence failed to support the applicant’s argument that “outlaw” is a weak term and that consumers have been educated to distinguish between different marks containing that term.

Finally, the TTAB concluded that the term OUTLAW was not so highly suggestive or otherwise weak in the marketplace that the presence of the other elements in this mark sufficed to avoid confusion.  The word OUTLAW was deemed dominant over the design (even though the design had previously been registered); MYSTIC MOUNTAIN in smaller type (also previously registered) would be viewed as a house mark; BRAD LEE SCHROEDER in even smaller type identified an individual associated with the product in some way; and WHISKEY and HANDCRAFTED SMALL BATCH were generic or descriptive words without significance as to the source of the product.  The TTAB found that the marks engendered similar overall commercial impressions, even when viewed in their entireties.

Accordingly, the TTAB affirmed the refusal to register the mark.

Author’s Note:  Consumers may rely on a package design to recognize a particular product online or on a shelf.  But when searching for a product, or asking a store clerk or bartender for it, they normally use a word mark.  Therefore, at least for purposes of trademark registration, words generally are considered dominant over even very prominent design features.

When you adopt a word as a trademark, even if it will be part of a design, you should have a search made to learn whether there is an existing similar product having the same or a confusingly similar word trademark.  If there is, the use of even very prominent design elements, or the addition of a house mark, may not avoid a finding of a likelihood of confusion unless the word is in such widespread use that it is weak as a source designation,  or unless the word is merely descriptive of the product, in which case that word may not be a desirable choice as a trademark in any case.