Is it a permissible expression of love and faith to hand out to classmates in a school or on a college campus homemade Valentine’s Day cards having short biblical messages directed to the individuals who accept them? 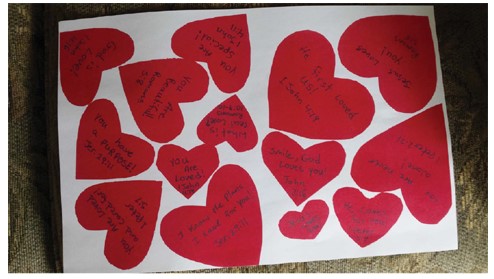 College student Polly Olsen thought so.  On Valentine’s Day in 2018, she resumed a family tradition, started early in her life with her recently deceased mother, of handing out to her fellow students in several areas on the Northeast Wisconsin Technical College campus a total of about 30 cards with messages such as “Jesus Loves You!,” “You are  Loved!” and “You are never alone!” with citations to the Bible.

Someone anonymously phoned a complaint to the College’s Security Office, and the responding officer stopped her on the ground that her conduct constituted “solicitation” and was a violation of the College’s Public Assembly Policy.  Ms. Olsen’s position was that the College was violating her constitutional right to free speech by discriminating against her based on her religious beliefs.

After an unsuccessful attempt to resolve her dispute directly with the College, Ms. Olsen filed an action against various College officials and moved for summary judgment.  However, before answering her complaint and motion, the College repealed its Public Assembly Policy and promulgated a new policy entitled “Freedom of Speech, Expression, and Public Assembly.”

The College first argued that its new policy made Ms. Olsen’s case moot. The Court rejected the College’s argument, pointing out that the new policy had the clear goal of preventing Ms. Olsen and others from what the policy now called “expressive activity” except in a small number of designated “public assembly areas.”

The Court went on to conclude that there could be no doubt that Ms. Olsen was engaged in a constitutionally protected form of expression.  Her Valentine’s Day cards resembled “handbilling” recognized as a venerable form of protected speech by the U.S. Supreme Court in Lovell v. Griffin, 303 U.S. 444, 452 (1938).  However, the Court recognized that, as with all forms of protected speech, reasonable restrictions might be lawfully imposed if, among other things, the conduct occurred in a “nonpublic forum.”  The College argued that its entire campus was nonpublic except for the designated areas.  Ms. Olsen contended that this characterization was overbroad.

The Court also distinguished some other cases the College relied on by stating that Ms. Olsen was not trying to hand out religious materials to a captive audience in a confined space, nor was she trespassing or publicly preaching to an assembly.

For these reasons, among others, the Court granted summary judgment to Ms. Olsen upholding her right to distribute her Valentine’s Day cards on campus, and it awarded her nominal damages of $1.

In this case, it appears that freedom of speech prevailed on that Valentine’s Day.

We trust that your Valentine’s Day will be filled with love and free expression.  However, we stand ready to assist should you need legal help on Valentine’s Day or any other day.