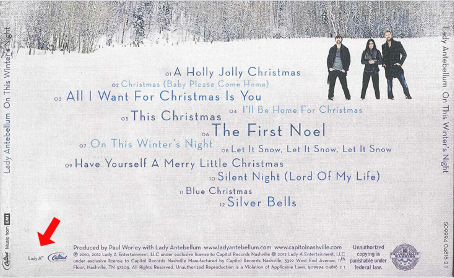 Turmoil over the trademark rights to the “Lady A” name used by two different musical performers reads like a law school issue-spotting exam.

A country music trio from Nashville, Tennessee was named “Lady Antebellum” when it began to perform in 2006.  It claims to have expanded to other states in 2012, to have won numerous music awards since then, and to have had ten No. 1 hits with more than 18 million album units sold, 34 million tracks sold and nearly five billion digital streams. Its recording of “Need You Now” has had almost four million views on YouTube. The group and its fans also shortened its name to “Lady A,” and its website reflected this nickname as early as 2008.

On May 18, 2010, the group’s corporation filed an intent-to-use application (later divided into two applications) for federal registration of the mark LADY A for live and streaming musical performances and for musical recordings. As of August 30, 2010, the group’s corporation assigned this mark and application to the group’s limited liability company.  Thereafter, these applications were accepted for registration without opposition and the registrant filed statements claiming use dating back to 2006.  These registrations are now incontestable, which means they are conclusive evidence of the exclusive right of the registrant to use the LADY A mark for the specified services, but they are not effective against anyone who had established local rights before the May 10, 2010 filing date.

On June 11, 2020, the group announced that it would discontinue using the “Lady Antebellum” brand and use only the “Lady A” brand.  It said this was motivated by “a stirring in our hearts and reflection on our own blindspots” as to racial injustice and inequality.

Meanwhile, Anita White, a black performer of blues, soul, funk, and gospel music from Seattle, Washington, had been performing solo under the stage name “Lady A.” She performed mostly in the Pacific Northwest, but has made a few appearances in Memphis, Tennessee, among other places. Her first of five solo albums was released in 2010. Before that, she had played in the Motown group called Lady A & the Baby Blues Funk band for 18 years.

The Lady Antebellum group and Ms. White both have Lady A artist pages on Spotify featuring their respective recordings.  The group has over 7 million monthly listeners; Ms. White has about 166 monthly listeners.  It has been reported that there are also some third-party performers or characters who have been known as Lady A, including Lady Amberlin on Mister Rogers’ Neighborhood.

Having announced the group’s name change and learned of Ms. White’s use of the Lady A name, the group contacted Ms. White to work out a coexistence agreement.  But when Ms. White’s representatives delivered a draft agreement that included “an exorbitant monetary demand” reported to be ten million dollars, the group brought suit against Ms. White in the U.S. District Court for the Middle District of Tennessee, Nashville Division, seeking a declaratory judgment of non-infringement but not asking for an injunction or money damages.

Ms. White has not yet answered the complaint, so there may turn out to be additional relevant facts.

The complaint alone suggests a host of possible legal issues:

At the very least, the group’s preemptive lawsuit against Ms. White has resulted in a flurry of unfavorable publicity.  If this case proceeds to trial, it will likely cost each party substantial legal fees.

However, the parties still might be able to work out a settlement with terms more acceptable to them than might be imposed by a court.  If that happens, the interesting legal issues may be left to be decided by law students.