CHINOOK, registered for “beer” and “wine,” did not block application to register CHINOOKER’D IPA for “beer.” 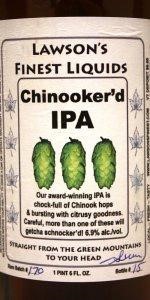 Sometimes a Trademark Trial and Appeal Board (TTAB) opinion can make your head spin even when you are sober.

Lawson’s Finest Liquids, LLC (“Lawson’s) applied to register CHINOOKER’D IPA for “beer” claiming use since September 2008.  The specimen of use supporting its application was a beer label displaying CHINOOKER’D IPA above a box containing an illustration of three hops and the wording “Our award-winning IPA is chock-full of Chinook hops & bursting with citrusy goodness.  Careful, more than one of these will getcha schnocker’d 6.9% alc./vol.”  (Emphasis added).

Lawson’s counterclaimed to cancel Mackey’s “beer” registration on various grounds.  The TTAB granted summary judgment to Lawson’s cancelling Mackey’s beer registration on the ground that Mackey had abandoned that registration by discontinuing its use of the mark for beer for at least 3 years with an intention not to resume.  Point 1 for Lawson’s.

However, the case continued based on Mackey’s common law resumption of use of the mark for beer through licensees.  Lawson’s introduced substantial evidence that anyone familiar with beer perceives CHINOOK as a beer made from chinook hops.  As such, the TTAB ruled that CHINOOK is generic for beer, and that Mackey had no proprietary rights in that word for beer.  Point 2 for Lawson’s.

This left as the sole issue whether CHINOOKER’D IPA for beer is likely to cause confusion with Mackey’s registered mark CHINOOK for wine, which it had used for over 30 years with sales of over $7.5 million since 1997.  The TTAB held that, although CHINOOK is an arbitrary mark for wine and therefore inherently strong, there was no evidence putting Mackey’s sales in context, so the mark’s commercial strength had not been established.  Further, a reasonable opportunity for confusion to occur did not exist given the small amount of sales by both parties since 2008 and remote trading areas made it unlikely that the same consumers would encounter both products.  Point 3 for Lawson’s.

On the other hand, it has been well established that beer and wine are related products, although the TTAB requires this to be proved in every case.  Mackey pointed to 54 use-based, third-party trademark registrations for both beer and wine and 8 websites advertising the sale of beer and wine under the same mark.  In contrast, Lawson’s pointed to 220 sets of third-party registrations for similar or identical marks owned by different entities for beer and wine.  Nevertheless, the TTAB held that Lawson’s showing had less probative value than Mackey’s, whose evidence established that beer and wine are related products. Furthermore, since neither the registration nor application in this case contained any distribution restrictions, the TTAB assumed they were offered in the same channels of trade to the same classes of consumers who may buy the inexpensive goods on impulse.  Point 1 for Mackey.

The decision thus came down to whether the respective marks were similar.  CHINOOKER’D IPA incorporated CHINOOK, so the marks were similar in appearance and sound.  But the TTAB held that this was outweighed by the different meanings and commercial impressions of the marks: CHINOOK suggested wine from the Pacific Northwest whereas CHINOOKER’D IPA suggested getting “snockered” (that is “drunk”) on a beer made from Chinook hops.  Point 4 for Lawson’s.

Accordingly, the TTAB held that confusion was unlikely given the different meanings, so Mackey lost and his opposition was dismissed.

How would you have decided?  In this case, each point decided by the TTAB could be questioned, although the result might be correct.   The double meaning of the Lawson’s mark made it victorious, but it may still face an appeal by Mackey.

Any trademark dispute is likely to be expensive and disruptive no matter who wins.  To help avoid this situation, it is prudent to invest the time and money to research and obtain professional advice as to the existence of possibly conflicting prior marks, both registered and unregistered before adopting a new mark.