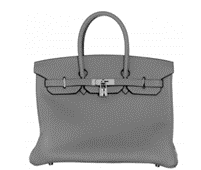 A New York federal judge ruled that a designer’s “MetaBirkin” NFTs linked to digital reproductions of Hermès’ famous Birkin handbags qualified as artistic works and thus were subject to the Second Circuit’s test for balancing free speech against trademark rights.

Digital artist Mason Rothschild created a series of “MetaBirkin”-titled digital images of blurry faux-fur-covered versions of Hermès’ luxury Birkin handbags, some of which are shown below, that were sold using NFTs (non-fungible tokens). The digital images were of faux fur, not leather, Birkin bags, and were not virtually wearable.

Hermès described NFTs in its complaint:

NFTs are units of data stored on a blockchain that are created to transfer ownership of either physical things or digital media.  When NFTs are created, or “minted,” they are listed on an NFT marketplace where NFTs can be sold, traded, etc., in accordance with “smart contracts” that govern the transfers.

Some of the MetaBirkin NFTs sold for prices comparable to real-world Birkin handbags, which sell for anywhere from thousands of dollars to over one hundred thousand dollars.  Several consumers mistakenly believed that Hermès was affiliated with the MetaBirkin NFTs.

Hermès sued Rothschild for trademark infringement and dilution in the U.S. District Court for the Sothern District of New York.  Rothschild moved to dismiss the claims, arguing that he merely used MetaBirkin in the titles of artistic works subject to certain First Amendment protections from trademark claims under a balancing test set forth by the Second Circuit in Rogers v. Grimaldi, 875 F.2d 994 (2d Cir. 1989).

Rogers and its progeny preclude liability for trademark claims made against artistic works if the use of the mark (1) has some artistic relevance to the work, and (2) does not explicitly mislead consumers as to the source, sponsorship or affiliation of the work.

Hermès argued that the MetaBirkin NFTs were not artistic works and thus were subject to the standard likelihood of confusion test set forth in Polaroid Corp. v. Polaroid Electronics Corp., 287 F.2d 492 (2d Cir. 1961) without First Amendment considerations.

But the Court disagreed, finding “[b]ecause Rothschild is selling digital images of handbags that could constitute a form of artistic expression, balancing the First Amendment concerns with Lanham Act protection requires applying the Rogers test.”

Consistent with Rogers and its progeny, the Court rejected Hermès’ arguments that (1) the MetaBirkin images were not artistic works merely because they were offered for sale, and (2) the use of MetaBirkins in promotional materials for the digital images, including in social media account names and URLs, were separable from the artistic works themselves, creating independent liability.

And, in a case of first impression, the Court held that the MetaBirkin images still were artistic works even though they were linked to NFTs:

[B]ecause NFTs are simply code pointing to where a digital image is located and authenticating the image, using NFTs to authenticate an image and allow for traceable subsequent resale and transfer does not make the image a commodity without First Amendment protection any more than selling numbered copies of physical paintings would make the paintings commodities for purposes of Rogers.

The Court, however, did acknowledge in a footnote that not all digital images linked to NFTs likely would raise First Amendment concerns under Rogers.  A traditional trademark analysis might apply if, for example, the MetaBirkins were sold as virtually wearable goods for use in the metaverse, thus making them more akin to commodities as opposed to artistic works.

Despite holding that the Rogers test applied, the Court denied Rothschild’s motion to dismiss, finding that Hermès had alleged sufficient facts to plausibly claim that Rothschild’s use of MetaBirkin (1) was not artistically relevant to the works, and (2) was explicitly misleading as to source, sponsorship or affiliation.  Such allegations included Rothschild’s own statements that he was seeking to associate MetaBirkins with the goodwill of the Birkin brands as well as allegations of actual consumer confusion.