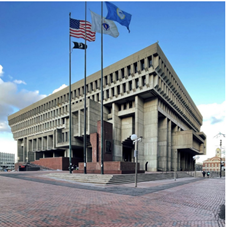 This controversy concerned the right of the City of Boston, Massachusetts to deny approval to fly a “Christian flag” on one of the three adjacent flagpoles located in front of City Hall.

Was this flagpole a place for the City’s exercise of government speech?  If so, it might be governed by the U.S. Constitution’s Establishment Clause, which prohibits the government from making any law respecting an establishment of religion and prohibits government actions that unduly favor one religion over another.  Or was this flagpole a place managed by the City for the exercise of private speech in a public forum?  In that case, this might be governed by the Constitution’s Free Speech Clause, which prohibits viewpoint discrimination.

Upon request and after approval, the City from time to time replaces the City of Boston flag with a third-party flag for a limited period of time.  On occasion, the City also allows an organization to hold a nearby event relevant to this third-party flag. Over a twelve-year period, the City had approved 50 unique flags raised on its third flagpole during 284 third-party events held on the City Hall Plaza.   These events involved cultural celebrations, visiting foreign dignitaries, historic events, and secular causes.  These flags related to countries, civic organizations, or secular causes.  The City had never denied any such request.

Camp Constitution, an all-volunteer association founded by Harold Shurtleff, requested approval to raise for one hour on the third flagpole the association’s “Christian flag” displaying a Latin cross, and to have “short speeches by some local clergy focusing on Boston’s history.”  This was the City’s first request related to a flag identified as religious. 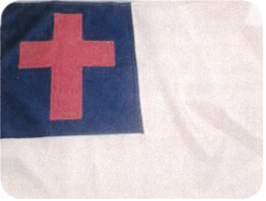 A City official denied this request on the ground that the City’s policy was to refrain from flying non-secular third-party flags in accordance with the Constitution’s prohibition against government establishment of religion.

The plaintiffs argued vehemently that the third flagpole was a public forum.  They based this on the City’s application form which stated that the City “seeks to accommodate all applicants seeking to take advantage of the City of Boston’s public forums,” and the related fact that the City had never denied any earlier request.  Consequently, the plaintiffs’ position was that the City could not place a content-based restriction on speech, and that the City’s exercise of unbridled discretion imposed an unconstitutional prior restraint on speech.

The City argued that its third flagpole was government speech, limited by the religion prohibitions of the Establishment Clause, and was not subject to the Free Speech Clause of the Constitution.

The First Circuit viewed the pivotal question to be whether the flagpole should be classified as a public forum for private speech or as a government forum for government speech.

The First Circuit thought that two previous Supreme Court cases were relevant.  In Pleasant Grove City v. Summum, 555 U.S. 460 (2009), the Supreme Court had upheld a city’s refusal to allow a private religious group to place a permanent monument in a city park in which other donated non-religious monuments had been previously erected, concluding that this was best viewed as a form of government speech not subject to the Free Speech Clause.  In Walker v. Texas Division, Sons of Confederate Veterans, Inc., 576 U.S. 203 (2015), the Supreme Court had upheld the Texas Department of Motor Vehicles’ refusal to allow a specialty license plate design featuring a Confederate battle flag, again concluding that the license plate was a form of government speech.  Each case adopted a three-factor analysis: the history of government use of the medium, how closely the public identified the medium with the government, and the degree of control the government maintained over the message conveyed.

In the City of Boston case, a unanimous three-judge panel of the First Circuit applied these factors in rejecting the plaintiffs’ argument:  Governments have used flags throughout history to communicate messages and ideas, an observer would view the three flags together on City Hall Plaza as connected to the City, and the City’s permission procedures demonstrated its intent to allow only selective access to the third flagpole.  Thus, the flags flying on all three adjacent flagpoles would be viewed as government speech.

The First Circuit rejected the plaintiffs’ argument that a reasonable and informed observer would take note of the intricacies of the administrative process leading up to the display, and would not attribute the flag’s message to the City.  To the contrary, the Court noted that the flag-raising guidelines expressly required the City’s permission, and that the City had limited physical access to the flagpole.  That the prior applicants had self-selected secular flag requests, so that the City had not been required to deal with a religious request, was not, in the Court’s view, evidence that the City was open to flying all flags.

The plaintiffs also argued that the City discriminated by excluding its religious flag while it continued to fly non-religious flags, and while it also flew flags displaying other religious imagery like the City’s own flag, and the Turkish, Portuguese and Bunker Hill flags (the latter also displaying a red cross).  The Court said these flags had been flown for reasons other than religious symbolism, and that the City’s exclusion of religious flags could not be construed as a hostility toward religion.  The Court decided that, on the contrary, the City’s honoring of the plaintiffs’ request would be a religious statement on the City’s part in violation of the Establishment Clause.

The Supreme Court reversed and remanded the First Circuit decision in an opinion written by Justice Breyer with three concurring opinions by Justices Kavanaugh, Alito and Gorsuch.

The Majority Opinion by Justice Breyer (in which Roberts, C.J., Sotomayor, Kagan, Kavanaugh, and Barrett, JJ. joined).  Stating that the line between a forum for private expression and the government’s own speech is not always clear, the Court concluded that, on balance, Boston had not made the raising and flying of private groups’ flags a form of government speech.

The history of flags in general, and on Boston’s City Hall Plaza in particular, favored Boston’s position that flags frequently constitute government expression. Whether the public would tend to view the speech at issue as the government’s was not clear on the evidence of record.  But it was more significant that Boston had not at all actively controlled what flags could be flown.

In this regard, the Court said the facts of this case were less like those in Summum and Walker, where there were direct government controls in place, and more like those Matal v. Tam, 582 U.S. ___ (2017), where the Court had held that the U.S. Patent and Trademark Office’s come-one-come-all attitude did not constitute government speech and did not support its refusal to register marks it deemed offensive.

Thus, Boston’s refusal to allow the Christian flag was impermissible viewpoint discrimination in violation of the Free Speech clause of the Constitution.  The Court did say that “nothing prevents Boston from changing its policies going forward.”

Kavanaugh, J. Concurring.  Justice Kavanaugh stated that the Boston official had a mistaken understanding of the Establishment Clause, and that “a government violates the Constitution when (as here) it excludes religious persons organizations or speech.”

Alito, J. Concurring in the Judgment (in which Thomas and Gorsuch, JJ., joined).  Justice Alito could not go along with the Court’s analysis using history, public perception, and the extent of government control, in the abstract.  In his view, these factors were an uncertain guide that obscured the real question:  Whether the speech at issue expresses the government’s own message.

Gorsuch, J. Concurring in the Judgment (in which Thomas, J. joined).  Justice Gorsuch traced the source of Boston’s refusal based on the Establishment Clause to the case of Lemon v. Kurtzman, 403 U.S. 602 (1971), which had focused on three questions: (1) Did the government have a secular purpose; (2) does the effect of that action advance or inhibit religion; and (3) will the action excessively entangle church and state?  In later years, the Court had modified its “effects” test to ask whether a reasonable observer would consider the action to be an endorsement of religion.

This malleable test had placed local officials in an ironic bind to avoid Establishment Clause liability by discriminating against religious speech and exercises. Lemon had been exposed as an anomaly and a mistake, and the Court had not applied its test for two decades.  Further, no one at the time of the Country’s founding had argued that religious symbols in public contexts was a form of religious establishment.

Justice Gorsuch concluded that Boston had erroneously sought to drag Lemon once more from its grave to justify a policy that discriminated against religion.

Author’s Note:  Flags have been, and continue to be, important for the communication of ideas.  This case is of interest in defining whose ideas were being communicated on the City of Boston’s flagpole.  As one litigant put it to the Supreme Court justices, the issue was whether the flagpole was more like a host-curated symposium or an open mic night.

All the Justices agreed that this flagpole was being put forth as a public forum, not solely for government speech, but they differed in their reasoning for that conclusion.  The outcome of the next case may well depend on the views of the sitting Justices at that time, and whether particular policies on flag choices are present in that case.