An application filed in the U.S. Patent and Trademark Office by P&P Imports LLC to register BREWSKI as a trademark in use for an apparatus for holding multiple cups for playing drinking games was refused by the Examining Attorney because of an existing registration of the trademark BREWSKI BROTHERS (with the exclusive right to use “Brothers” disclaimed apart from the mark as a whole) for sport balls. 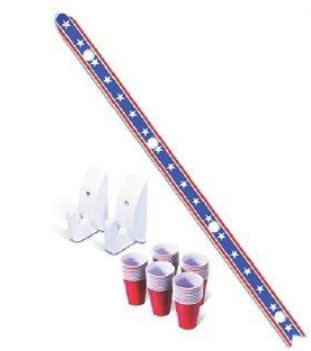 The Applicant appealed to the Trademark Trial and Appeal Board (TTAB), which only considers the application and registration before it but not any marketplace differences.  The TTAB affirmed the refusal.  It found the marks similar, the goods related, and the channels of trade overlapping.

The TTAB took judicial notice that BREWSKI is a slang term for beer based on a dictionary definition.  Therefore, the TTAB found it suggestive of goods used in connection with beer.  It also found that BREWSKI was the dominant term as the first word in the registered mark BREWSKI BROTHERS, especially given the weak trademark significance of the disclaimed word “BROTHERS.”  Therefore, the marks were found to be similar.

As to the goods, Applicant stated that its apparatus allowed the users to drink in unison and that “no ball of any kind can be used with Applicant’s goods.”  It argued that the Registrant’s balls could be for any sport, but the TTAB found that this included ping pong balls used in drinking games.  Thus, the goods were found to be related. 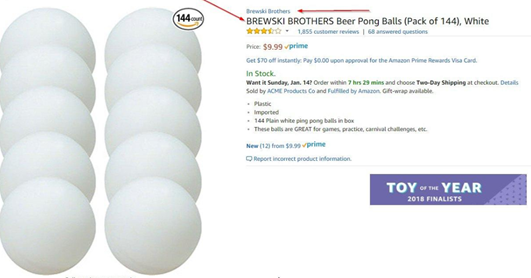 As to the channels of trade, the application and registration were unrestricted.  Applicant argued that sport balls are sold in sporting goods stores whereas Applicant’s goods would be sold by drinkware distributors, novelty party supply stores, and alcohol and beverage markets.  But website evidence showed that drinking games and ping pong balls may be offered in the same stores.  So, the channels of trade were found to overlap.

Accordingly, the TTAB held there was a likelihood of confusion.

Author’s Note:  Readers may be aware that the TTAB has been expanding its findings of likelihood of confusion between beer and other alcoholic beverages and even nonalcoholic beverages. Here, in a similar vein, it found a likelihood of confusion as to, on the one hand, a drinking game apparatus in the shape of a ski that did not involve balls, and on the other hand, sport balls that could include balls used for the beer pong drinking game, which was the case although the TTAB could not consider that fact.  As to the marks, one mark was the suggestive mark BREWSKI (which could have been a play on words given the shape of the apparatus), and the other mark, BREWSKI BROTHERS, had an arguably different connotation.

Reasonable people might differ as to the correctness of this decision.  Some might conclude that the judgment of the Court suffered from a blurred view of the real world.  Others might conclude that registrants must be protected against ordinary consumers mistakenly thinking the two sources are the same or at least related.

The Applicant could appeal this decision.

Bob's practice focuses on domestic and international trademark prosecution and enforcement matters. He regularly advises start-up craft breweries and other beverage, food and hospitality brands, both small and large.