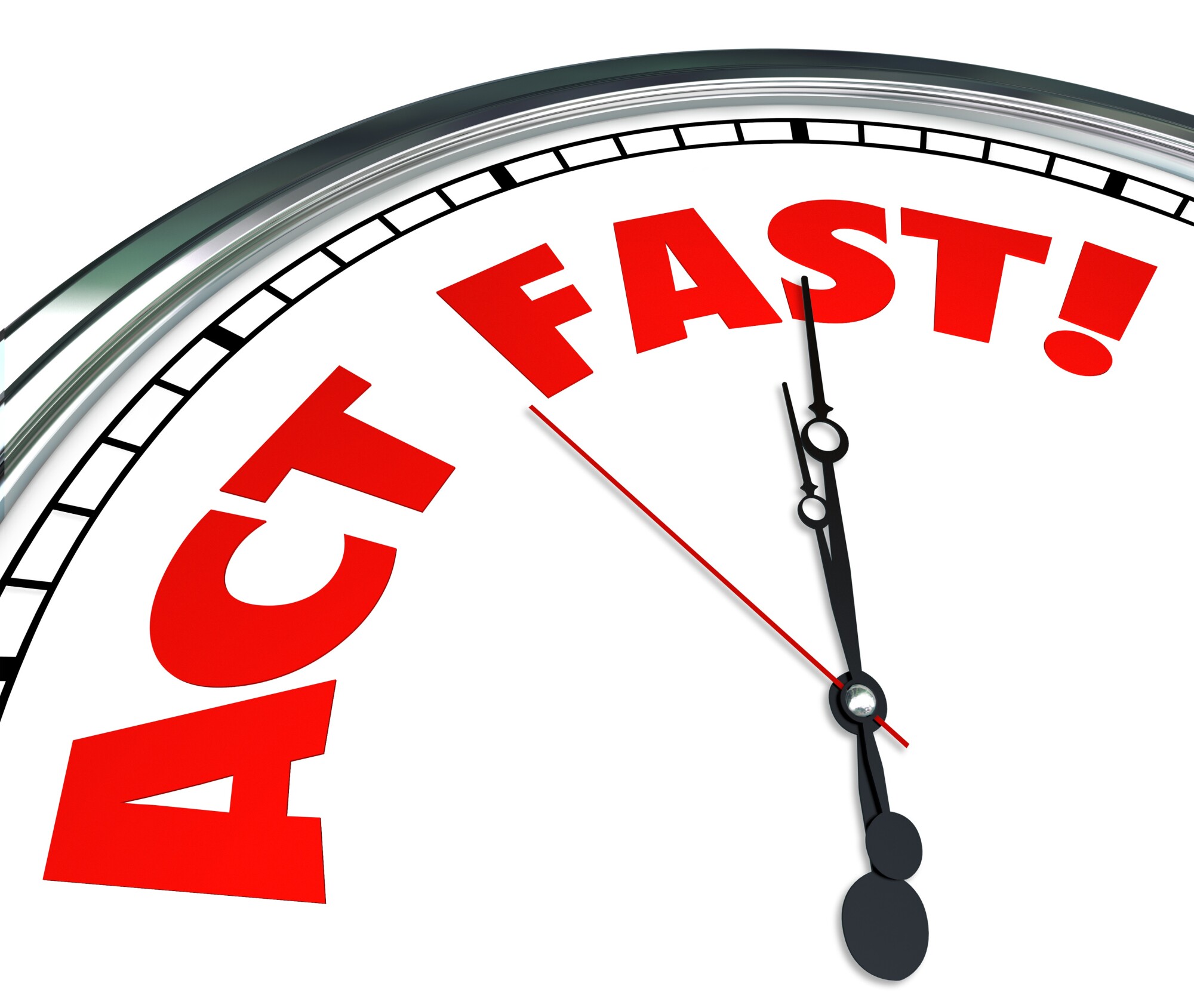 “Almost sold out.” “Act now.” Such marketing messages, conveying urgency to purchase, led to a $2.6 million settlement with the Attorney General of New York over deceptive marketing practices.

On March 16, 2022, the Office of the Attorney General of New York announced this expensive settlement with an online travel company named Fareportal.  Fareportal, the operator of online platforms such as CheapOair and OneTravel, provides services that allow consumers to purchase airplane tickets and book hotel and car rentals.

New York’s investigation revealed that since at least 2017, the company had engaged in deceptive marketing tactics to manipulate consumers into making purchases.  In particular, the Attorney General found that Fareportal’s tactics created a false sense of urgency and exerted social pressure on consumers to complete purchases of tickets and add-ons quickly.  As explained by Attorney General Letitia James, “Consumers wanted to land affordable tickets through Fareportal’s platforms but were met with lies instead."

In 2021, the Federal Trade Commission stepped up its enforcement against previously-identified illegal “dark patterns” of marketing techniques that manipulate consumers into purchases. Perhaps the FTC was engaging in a bit of marketing of its own by using the phrase “dark patterns.”

Social media, influencer marketing, and mobile browsers may have amplified the effectiveness of those techniques, but those “dark patterns” were not necessarily new. Nonetheless, the phrase “dark patterns” resonated with a suspicious public and became a calling card for regulators. Indeed, New York’s Attorney General labelled Fareportal’s marketing as “dark patterns” tactics when announcing the settlement with the online platform.

To create a sense of urgency, Fareportal platforms displayed fictitious messages indicating the number of tickets left for a flight or a percentage of hotel rooms available at a certain price, and would prompt consumers to “book now.” For example, if a consumer was searching for a single ticket from New York to Toledo, she would see a message that there were only two tickets still available when, in fact, there were many. Consumers were thus misled to believe that time was running out to purchase the deal.

After the consumer selected an offer, more messaging professed to indicate how many other consumers were also “looking” at the flight. The number displayed, however, was randomly generated and not based on real statistics. This number would appear even if the consumer was the only person considering purchasing that ticket at that time. 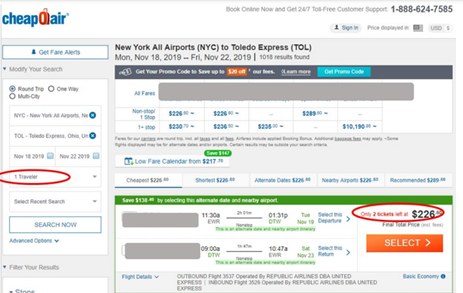 The websites also used a countdown timer, prompting consumers to “book now before the tickets run out” as shown to the right.   The timer was merely used to pressure consumers into making a purchase and served no other function.  Fareportal did not reserve tickets for consumers during the countdown and other consumers were able to purchase tickets during that time. Moreover, the time running on the timer was arbitrary and unrelated to the availability of tickets.

Fareportal also used social pressure to encourage consumers to purchase add-ons, such as a travel protection policy or upgrades on their seats.  Before completing a purchase, Fareportal would display messages featuring a fictitious number of consumers who had either purchased travel protection or upgraded their seats.  Again, the number was false and randomly generated. According to the New York Attorney General , such tactics misled consumers to believe they were not using the same good judgment as other customers if they did not make the add-on purchase.

Fareportal also engaged in misleading messages about its pricing and fees.

Bogus “Discounted Prices.”  When displaying pricing, the platforms falsely indicated that they were offering tickets at a discounted price. For example, as shown to the right, Fareportal would display price comparisons with strikethroughs to give the impression that the fare had previously been offered at a higher price when it never had been. In fact, sometimes Fareportal would charge more than the airlines. These strikethrough tactics have been previously vetted in the context of  the FTC’s Guides Against Deceptive Pricing. In particular, there is a robust history around outlet shopping and comparative pricing cases. The New York Attorney General reached a similar conclusion that the strikethrough advertising was deceptive because it was not substantiated. 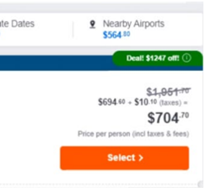 Hidden Fees.  In addition, at checkout, Fareportal provided consumers with a price breakdown.  This included line items for “base price” and another for “Taxes and Fees.”  While consumers assumed that Fareportal included their services fees under the “Fees” item, instead, Fareportal built the service fee in the base price. Thus, the label of “Taxes and Fees” was deceptive.

Disclosures Not Clear and Conspicuous.  Lastly, even though most major airlines allow consumers to cancel their tickets for free within 24 hours of purchase, Fareportal’s policy was to charge a fee of up to $75 per ticket for these cancellations.  While such a policy is not in and of itself problematic, Fareportal did not disclose the policy clearly and conspicuously.  Consumers could only find out about the policy by clicking on a small “i” near the check-out button.  That click-through would open a pop-up window with fine print.  Following a trend in class action cases and regulatory investigations, the New York Attorney General questioned whether consumers would understand the label that linked to the disclosure. The “i” was not sufficiently self-explanatory to prompt consumers to click on it. As a result, many consumers were unaware of the cancellation policy and were charged unanticipated fees.

The New York Attorney General announced the settlement and described Fareportal’s actions as “nefarious.” As explained by Attorney General Letitia James, “We won’t tolerate attempts to trick consumers and will continue to protect every penny that belongs to New Yorkers.”

Fareportal issued its own statement asserting that its technology was always evolving and that many of the features at issue in the investigation were experimental and no longer in use. Perhaps these were mitigating factors in the financial amount of settlement for Fareportal. However, even if $2.6 million represented a small amount to a company with over $5 billion in sales, the settlement amount would still be a substantial deterrent to most companies.

In the Assurance of Discontinuance, Fareportal agreed to pay $2.6 million to New York State in disgorgement and costs. It also promised to cease the following deceptive practices:

On a prospective basis, Fareportal is subject to the Attorney General’s order to ensure that its messaging is based on real-time and actual data. In addition, in keeping with long-standing principles around pricing accuracy, Fareportal should only use comparison prices that have been actually ordered.

While Fareportal is a travel industry entity, the lessons from this settlement reach into many other industries. It is commonplace for retail websites to exhort customers to buy based on a sale expiration date, quantity of products (e.g. “low inventory”), or number of other shoppers on a particular item. Comparative pricing is also a tactic used across industries. The Fareportal settlement sends a strong message to avoid fabrication of facts. All consumer messaging must have substantiation in real-time.

In addition, the New York Attorney General prominently used the FTC’s adopted phrase “dark patterns.” It is clear that state regulators are working in tandem with the federal agency to clean up the marketplace from deceptive urgency and pricing practices.

If your company is engaged in urgency marketing or comparative pricing, now is the time to review your algorithms to ensure that you are not disseminating deceptive messaging to consumers.